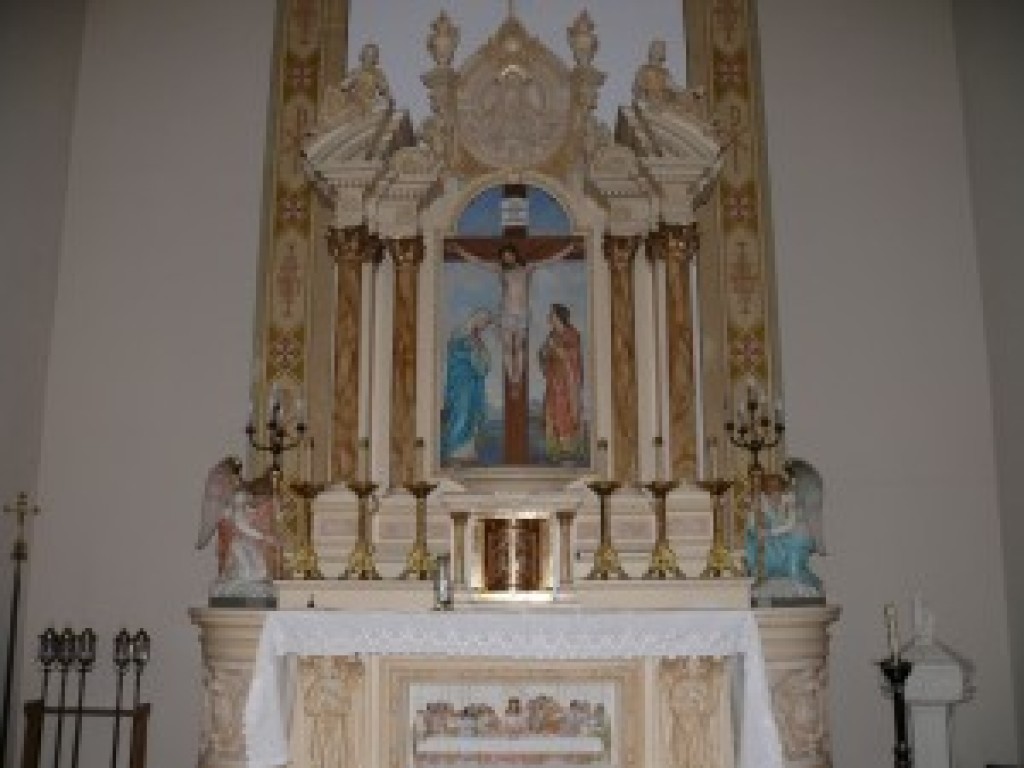 In 1889 Sisters Angela, Magdalene Riner, Victoria Siedler, Anselma Villiger and Scholastica Vorney came to Dakota Territory at the request of Bishop Martin Marty. (Of these, Sister Angela, Magdalalene and Anselma are now buried in the Cemetery.) When the Sisters came in April of 1889, they were housed in a former tavern. Within a week they had opened a summer school for girls. The parish church was located near the cemetery and by the next year 1890 the first sandstone building was finished which was later the girls' house. By 1910 two other buildings were erected: the convent and the high school.

In 1911 The Chapel was built by Henry Bruch and Nick Keffeler. It was very different than it is now. It was used as the parish church and the old church was moved. The walls were bare, there was no doors on the side.  There was a grill that separated the side chapels from the main altar and the parish church.  The altar was much smaller.

This altar was imported from Germany in 1919. You can see Faith, Hope and Love, the Trinity. In 1916 a St. Joseph came to the door in the form of Mr. Stahl. The Sisters had been praying for an artist to paint the walls. Mr. Stahl said he was no artist but he could copy anything. Father gave him some holy cards and asked him to paint like the crosses on them and he started to paint. The paintings on the ceiling represent the authors of the New Testament: John is the only one who is represented on the wall. The first picture is of St. Peter. As with all the saints you can tell who it is by the things that are around them, the keys of the kingdom are in Peter's belt. He wrote only two letters but the gospel of Mark claims the authority of Peter. Next to him is St. Paul, who has his sword. He was not an apostle, but he wrote 13 epistles to the churches. Then there is John. Besides the gospel, he wrote 3 letters. On the other side are two puzzles: We know that St Jude wrote one epistle. Now it says that St. James the Greater (brother of John, was beheaded, so this is a picture of St. James the Greater.) But the author of the epistle of St. James was St. James the Less and tradition says he was stoned to death. And the last one.  He is the author of Hebrews but we don’t know if that author was Barnabas or Apollo. So we will call him Apollo.

If you look at the stained glass windows there is one for Mathew, Mark, and Luke. There is no stained glass window for John. One window is St. Angela Mariachi, the patroness of our Founder Mother Angela. Saint Angela Merici lived 1470-1540, at a time when only rich women or nuns were educated. Angela proposed radical ideas of education for all. She said women should be teachers in schools and be able to serve the poor. She founded the Company of Saint Ursula, or the Ursulines. They were the first group of women religious to work outside the cloister and the first teaching order of women. The next Window is St. Dominic after the namesake of Dominic Keffler, one of the people who made the chapel possible. The next window is St. Martin, the patron of St. Martins and also in honor of Bishop Martin Marty who first invited the Sisters, and was the Bishop of the Dakota Territory at that time. On the other side is St. Scholastica, the twin Sister of St. Benedict. St Benedict is the Father of Monasticism and we are called Benedictines because we follow the Rule he wrote. Next is St Patrick because at by the time the Chapel was built, the Dakota territory had been divided into the Diocese of Sioux falls and St. Patrick Diocese. In the side chapels on the right side is St Joseph’s Window  and on the Left Mary’s window.

The Murals in the ceiling are: Birth of Jesus, Assumption of Mary, and Christ in Glory with Mary and St John at Jesus side. The words on Jesus’ book say “I am the way, the truth and the life.” The mural on the left side of the side chapel is the death of St Scholastica:  Saint Benedict greets the body of his sister, Saint Scholastica. The text below the mural says “As Benedict was praying in his cell, he saw the soul of his sister, in the form of a dove, enter the secret places of heaven.” On the Right side of the side chapel is the death of St. Benedict. The angel of death, holding a crown of victory, awaits St. Benedict. His monks surround their spiritual father unwilling to let him go. St. Benedict stands in an attitude of prayer.  Below the picture are the words “The soul of Our Holy Father Benedict departed amidst words of prayer.

In 1962, St. Martins became the Paraclete Fathers home for troubled priests. Then in it was sold to Sky ranch in 1972 and the chapel was used as a basketball court. In 1980 the school burned and in 1982 the restoration committee started to get organized. The Sisters are very grateful to the Restoration committee for doing such a beautiful job in restoring this historic and sacred chapel.